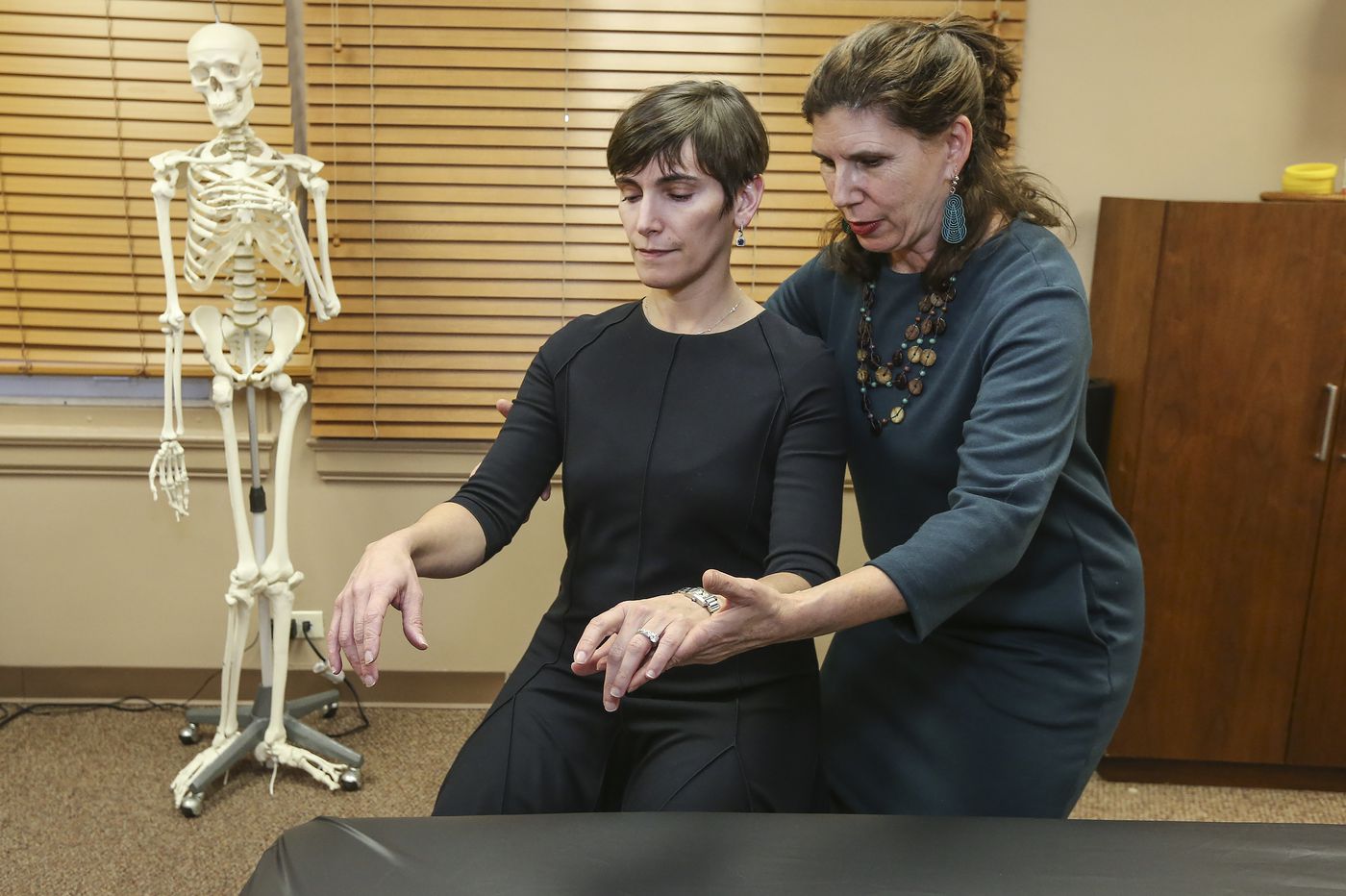 Rashad Choudry, who wears heavy lead garments for his work as a vascular surgeon at Einstein Healthcare Network, has thrown his back out three times in 13 years. Howard Ross, a colorectal surgeon at Temple University Hospital, has had serious shoulder, neck, and finger pain. A Temple colleague, urologist Daniel Eun, has had tennis elbow and rotator cuff problems, plus surgery for carpal tunnel syndrome.

Increasingly, surgeons are talking about a once-taboo topic: the pain they feel after hours spent contorted into positions the human body was not meant to sustain. Surveys show that a high percentage of surgeons regularly feel musculoskeletal pain related to work and that they have twice the risk of such injuries as the general population. The pain is severe enough that some fear they will have to reduce their workloads or retire early.

“The last thing we can afford as a society right now is foreshortened surgical careers,” said Adrian Park, chair of surgery at Anne Arundel Health System in Annapolis.

A pioneer of laparoscopic surgery in the 1990s, Park, now 58, quickly saw red flags. “Wow,” he recalls thinking, “this is really taking it out of me.” Now, large numbers of surgeons have been doing this kind of minimally invasive work long enough for cumulative damage to become apparent. In 2010, Park, who has had carpal tunnel surgery on both wrists, surveyed laparoscopic surgeons and found that 87% had injuries or discomfort from their work. “I think this really shocked a lot of us,” he said.

It’s ‘like painting the dome of the Sistine Chapel’

Laparoscopic surgeons use long-handled tools to operate through tiny incisions. The technique helps patients heal more quickly than they do with open surgery. Surgeons, though, often must hold their arms forward and raised at the elbows, a position that stresses arm and shoulder muscles. They also twist uncomfortably to operate while watching video screens above or in front of them so they can see what’s happening inside their patient.

Peter Nichol, 52, a Wisconsin surgeon who does pediatric abdominal and thoracic procedures, described laparoscopic surgery as “sort of like painting the dome of the Sistine Chapel.” During long procedures, he concentrates so hard that he doesn’t notice his own discomfort. “It’s kind of like athletics,” he said. “You get in a zone.” He’s been in physical therapy off and on for six years to cope with neck pain he thought might force him to quit.

Once Park raised the subject, “people started coming out of the woodwork” to tell him about their pain. In one of his recent studies, surgeons rated their pain at close to 5 out of 10 at the beginning of a surgery day and 7 or 8 by the end.

Stephanie Pearson hears from surgeons in their 50s and 60s who are suffering with spinal compression, bulging disks, and entrapped nerves. An obstetrician-gynecologist, Pearson had to leave practice after a patient kicked her during a delivery, causing a career-ending shoulder injury. She now sells disability insurance to other physicians for an Ardmore firm.

Doctors, she said, typically keep going until they can’t stand it anymore.

“Nobody wants to hear a physician complain,” she said. “… You do what you have to do to get the job done, and our bodies pay the price.”

Experts said health-care systems need to teach young surgeons about proper posture and positioning. Duke University’s medical school four years ago started an unusual surgical ergonomics program that’s mandatory for residents and a resource for established surgeons. An occupational therapist from the program observed plastic surgeon Scott Hollenbeck when he started having neck pain and numbness in his fingers. He learned exercises and stretches. “Now I approach surgery maybe like an athlete would approach a competition,” he said.

But doctors said it can’t all be up to them. “Other industries have been better at looking at processes to avoid worker injuries,” said David Welsh, a Batesville, Ind., surgeon who has surveyed peers for the American College of Surgery. Some hope that exoskeletons, wearable devices that are gaining popularity on industrial assembly lines because they reduce muscle strain, can also help surgeons and OR staff.

Only 11% of surgeons surveyed by the American College of Surgeons in 2017 said their hospital system had a program to address and prevent ergonomic injuries.

‘No one was talking about it’

The problems go beyond laparoscopic surgery. Surgeons who do traditional or open surgery spend hours leaning over and looking down. Heavy loupes, or magnifying glasses, can exacerbate neck and back pain. Vascular surgeons like Choudry, who must wear heavy gear to protect themselves from X-rays used during surgery, are also prone to back issues.

Karen Zur, a pediatric otolaryngologist at Children’s Hospital of Philadelphia who specializes in airway and voice disorders, does endoscopic surgery, a minimally invasive technique similar to laparoscopy. She has smaller patients and instruments.

“There’s a lot of tension on your hands, on your elbows, on your neck, on your chest, to really steady yourself to work in a tiny area,” she said. Now 46, she had pain in her wrists and neck bad enough for her to seek advice from a surgeon even before she finished training. “No one was talking about it,” she said. “… I’ve made it a point to talk about it.”

Robotic surgery, which allows surgeons to do minimally invasive procedures while seated in a console, is considered the best for surgeon’s bodies — if used with care.

Eun, 47, now does robotic surgery exclusively. “Robotic surgery has really saved me from that agony,” he said. “If it wasn’t for robotic surgery, I would probably be on disability already.” Still, he cautions trainees and fellow surgeons that positioning is crucial. He pays particular attention to how he turns his wrists and tries not to press into the forehead rest, which can increase neck tension.

Height differences among surgical teams are a huge challenge. A short assistant can stand on stools, but a tall trainee can only bend over or straddle his legs while working with a short surgeon. Team members often must maneuver awkwardly to find a spot near the operating field.

Zur has invited Ariel Weiss, a former dancer who teaches the Alexander Technique, which focuses on skeletal and muscle coordination, to talk to surgical residents about ergonomics. When Weiss asks them to show her how they stand in the OR, it looks like a game of Twister, she said.

A 2017 analysis of ergonomics research in JAMA Surgery said numerous studies found that more than 80% of physicians experienced pain during procedures. From 1997 to 2015, the number of surgeons reporting spine diseases increased by more than 18%. Seventeen percent to 19% of surgeons said they had spine disease or rotator cuff pathology and 9% had carpal tunnel syndrome. Of those with musculoskeletal problems, 12% said they had to take a leave of absence, change their practice, or retire early.

A study in Surgical Endoscopy found similar rates of pain in men and women, but that women were treated more often for hand pain. Many blamed instruments that were designed for bigger, stronger hands.

In April, a study in the Journal of Surgical Research found that three-fourths of medical students reported pain while mainly observing surgery. Almost a third said the physical demands of the job might keep them from choosing surgery as a career.

Noam Cohen, an ear, nose, and throat specialist at Penn Medicine, initially wanted to do surgery on patients with head and neck cancer, but found the physical pain from doing those procedures “crushing.” That was one reason he chose to do sinus surgery instead. “I could do a full day of operating,” he said, “and I didn’t feel like I got run over by a truck.”

Many surgeons eventually get better at listening to their bodies. After physical therapy, they pay more attention to posture, how they position equipment, and how they hold their tools. Choudry ordered protective lead coverings that weigh 15 pounds instead of 20, after his back problems. That was a big help.

Park did a study in 2016 in Annals of Surgery that found 90-second microbreaks for stretches during surgery reduced surgeons’ pain, with the strongest impact on the neck, right wrist, and right shoulder.

Surgeons also learn to strengthen key muscles, especially the back and abdominals.

“For surgeons, having a strong core is extraordinarily important,” said Ranjan Sudan, a general surgeon at Duke Health who works with the ergonomics program.

Temple’s Ross rows five days a week on the Schuylkill to keep in shape for work. Francesco Palazzo, 46, a laparoscopic surgeon at Jefferson University Hospital, started working out religiously seven years ago after he started having elbow and shoulder problems. He recently discovered the best upper-body treatment so far for him: exercise classes built around boxing.

Zur took lessons in Alexander Technique for years and now does Pilates.

Weiss helped her with small changes that can make a big difference, such as what kind of pillow to sleep on, how to safely get out of bed, and how to turn a doorknob with her whole arm, not just her wrist. During a recent meeting, Weiss gently guided Zur’s posture as she demonstrated how she stands during surgery. “Let your head come up and back,” Weiss told her. “When your hands come up, you’re letting your back expand. Make sure those hip joints have some freedom.” Weiss said Zur tends to stabilize her body with her hips, which causes tension in her spine.

Zur also insisted on an adjustable chair when she came to CHOP 14 years ago so she wasn’t twisting over to examine squirmy kids. Now all the doctors have chairs that can change height.

Such efforts to compensate have limits. Some aspects of surgery are inherently uncomfortable, surgeons said, because of the way patients must be positioned.

So far, technology designers have typically focused on improving patients’ outcomes. “There’s not a lot of consideration of the ergonomics of users,” said Denny Yu, who leads the Healthcare Ergonomics Analytics Lab at Purdue University.

That’s why some like the idea of using exoskeletons in operating rooms. Yu leads a research team that is testing the backpack-like devices, which use springs, cables, and pulleys to transfer weight from shoulders to the outside of the hips, on OR teams associated with the Indiana University School of Medicine.

A small study two years ago found that the $5,000 devices reduced shoulder fatigue among surgeons by 80%, said Joseph Zawaideh, vice president of marketing and business development at Levitate Technologies in San Diego.

Zawaideh said his cofounder, mechanical engineer Mark Doyle, had surgeons in mind when he started designing exoskeletons, but industry got wind of the work and encouraged Doyle to shift gears. Now, Toyota, Lockheed Martin, John Deere, and BMW are customers, using the devices for assembly-line workers.

Doyle and Zawaideh are now preparing to modify the product for health care.

“We know it’s going to be big in the operating room,” Zawaideh said.

He also foresees a market for ultrasound technicians, older people who want to continue doing yard work and housework, and patients recovering from shoulder surgery.

Article from https://www.inquirer.com/health/surgeons-ergonomic-pain-work-related-20191218.html
Share on FacebookShare on TwitterShare on Linkedin